SHIMLA : Prime Minister Narendra Modi today inaugurated the strategically important all-weather Atal Tunnel under the  Rohtang pass, which reduces the distance between Manali and Leh by 46 km and the travel time by four to five hours, in Himachal Pradesh.

Addressing the gathering at South Portal of the Atal Tunnel, Prime Minister appreciated the hard work of the Border Roads Organisation.  He said that the Tunnel would open new vistas of development in the landlocked hinterland of Lahaul-Spiti and even beyond  in Leh and Ladakh as well. He said that the foundation stone for the access road to the south portal of the tunnel had been laid by the then Prime Minister Atal Bihari Vajpayee in 2002. 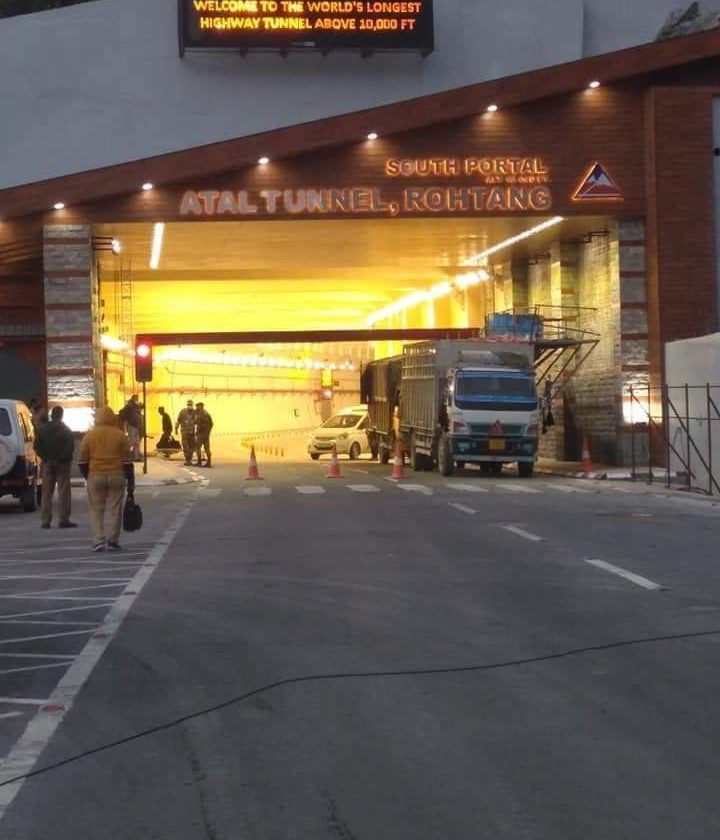 Prime Minister also went around the picture gallery on the ‘Making of Atal Tunnel, Rohtang’.

Prime Minister also flagged-off a bus from South Portal in Lahaul Spiti valley to Manali on the occasion.
A short film on Atal Tunnel Rohtang was also screened on the occasion.

Chief Minister said that opening of the Atal Tunnel at Rohtang would give a fresh impetus to tourism, agriculture and horticulture activities in Lahaul valley, as till now, tourist season here lasted only a few months. He said that with opening of this Tunnel, now beautiful Lahaul Valley would become a favourite tourist destination as it would have easier access from Manali.

Jai Ram Thakur also thanked the  Prime Minister for showing keen interest in early completion of this mega project, which was not only important from strategic point of view, but would also prove a boon to the people of Lahaul Spiti district in strengthening their economy. He said that now the farmers of the valley would be able to market their produce in the markets easily.

Chief Minister also thanked the Border Roads Organisation (BRO) for working relentlessly to overcome major geological, terrain and weather challenges that included the most difficult stretch of the 587-metre Seri Nalah. He said that the tunnel has reduced the distance between Manali and Leh by 46 km.

Director General of Border Roads Organisation, Lt. General Harpal Singh while welcoming the Prime Minister, Union Defence Minister, Chief Minister, Union Minister of State for Finance and Corporate Affairs and other dignitaries present on the occasion, said that Atal Tunnel was world’s longest highway tunnel at this height and was unique in many ways. He said that Atal Tunnel has telephone connections at every 150 meter for emergency communication, fire hydrant mechanisms at every 60 meter, auto incident detection system with CCTV cameras at every 250 meter, air quality monitoring at every 1 km, lighting/exit signs at every 25 meters, broadcasting system throughout the tunnel and cameras at every 60 meters.