CHANDIGARH : Certainly, this resplendent quote by Swami Vivekananda Ji has been absorbed by the 21st Century World leaders in the wrong sense. Swami Vivekananda refers to this globe as a Gymnasium that makes an individual strong and resilient enough to face all odds and still lead a blissful life. But here the commanders are flexing their muscles using all the gym equipment to quell each other and make themselves the stronger ones.

The Russia – Ukraine war has been in the news since February 2022. The Protagonists of this warfare are Vladimir Putin and Volodymyr Zelenskyy. To some, Putin may not be wrong but to many Zelenskyy is the Victim. So let us first understand the root cause of this horrendous act being performed.

Here I am enlisting a few names of Leaders & terms for a better understanding of the situation before jumping into the intricacies.

Vladimir Vladimirovich Putin: The current president of Russia was a former intelligence officer and also the Prime Minister for two terms: 1999-2000 & 2008-2012. In retrospect, he waged a war against Georgia and annexed Crimea too. On 30 September 2015, President Putin authorized Russian military intervention in the Syrian civil war (Link in references for my Article on Syrian War).

Volodymyr Zelenskyy: A former Comedian, Volodymyr was sworn in as the President of Ukraine on 20 May 2019. He worked in television series and Movies in Ukraine before taking up this mammoth responsibility. Zelenskyy had assured his country of ending the longstanding Conflict with Russia which has its roots in the 2014 Annexation of Crimea. Unfortunately, the series of events really don’t seem to be going the right way.

Revolution of Dignity: Also known as the Maiden Uprising, it was a wave of Civil Unrest in Kyiv, Ukraine which began in November 2013. The protests were ignited by the Ukrainian Government’s sudden decision to not sign the European Union – Ukraine association agreement and instead choose closer ties to Russia. The People of Kyiv united to oust the Russian-backed president, Viktor Yanukovych. Following the pro-western Revolution of Dignity in Ukraine in 2014, Putin seized eastern regions of the nation and annexed Crimea. All this gave the citizens of Ukraine enough reasons to tilt toward the west.

NATO: The North Atlantic Treaty Organization is a Military Alliance between 30 Countries formed in the aftermath of World War II. Headquartered in Brussels Belgium, NATO operates on the principle of Collective Defence enshrined in Article 5 of the Washington Treaty.

Chronology of the Current War:

The ongoing war between Ukraine and Russia can be simply understood with the help of the below-prepared Chart. 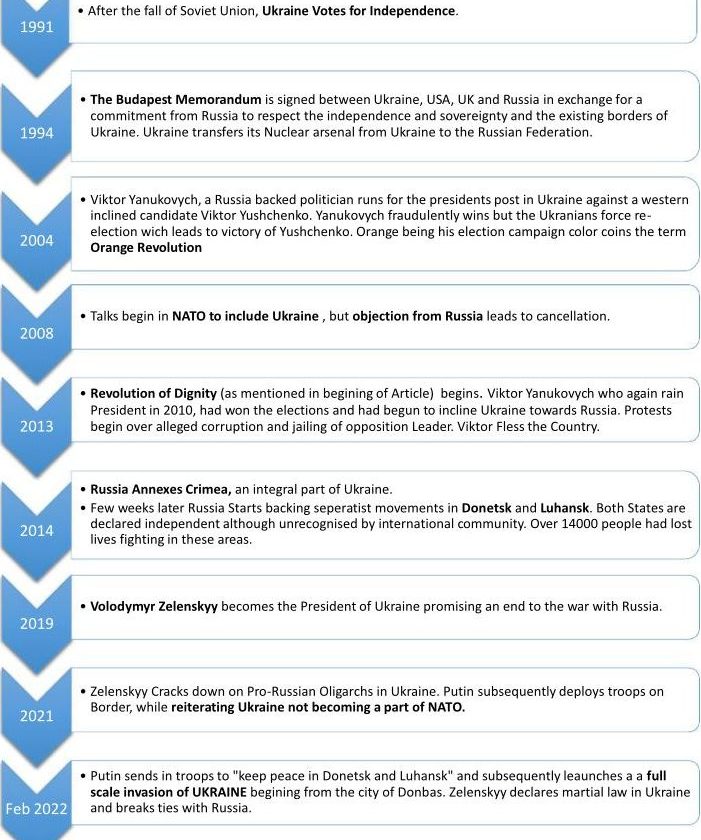 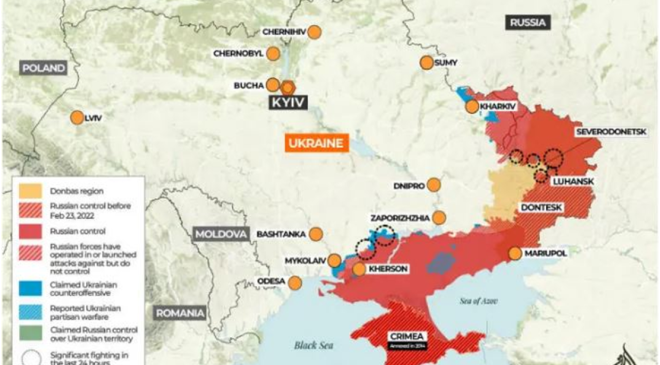 The image below represents the revised Economic Growth Forecasts by the Organization for Economic Cooperation and Development. 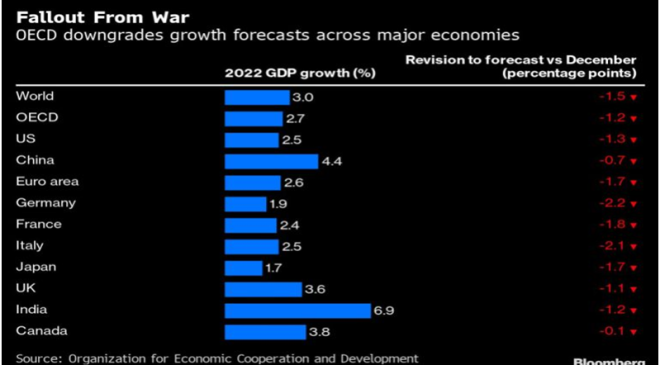 In what can be called a fair balancing act, India under the able leadership of Prime Minister Mr. Narendra Modi and External Affairs Minister Subrahmanyam Jaishankar has not been very open in taking sides.

My Take on the Situation

According to the United Nations High Commissioner for Refugees, more than 3.8 million Ukrainians fled the country between February 24 and March 27. That’s about 8.8 percent of Ukraine’s total population. People have been rendered homeless, children have lost their early days of school, Businesses and services have been under lock and key, and the retirees have to once again hunt for their daily bread. As per the World Bank’s report, Ukraine’s economy has shrunk by 45.1% this year, while Russia’s economy has already plunged into a deep recession and the output is projected to contract by 11.2% in 2022. Ukraine alone has lost approximately $600 Billion as a result of Russia’s invasion. The Russian Stock market is closed.

The Whole Point of this war being fought between these two nations is beyond the understanding of any common citizen who resides in either of the two countries. Any working individual or businessman will surely not be happy enough to see his Company or business suffering just because the Top Bosses of their Countries are unable to come to a legitimate settlement over the Geopolitical differences. A few questions that arise in any rational individual’s mind are:

While these questions surely go unanswered The War is still on.