In politics, nothing happens by accident. If it happens, you can bet it was planned that way.

The term Brexit is an evident portmanteau of “Britain” and its “Exit” from the European Union. The entire Brexit Conundrum seems to be an esoteric affair but in this article, we’ll understand the semantics of it in a simplified manner.

First, we need to throw light on the European Union and subsequently about the inevitable Exit of Britain.

Way back in 1993, The European Union was formed with an internal single market, through a standardized system of law that applied to all the member states. The objectives for the formation of the Union were:

Supporting a population of over 513 million i.e. roughly 7.3% of the World’s population, the E.U presently has a gross GDP of 19.67 trillion US dollars. There are 28 Members in the Union with Britain being one of the major financial contributors. The E.U is the second-largest economy in the world with the Euro being the second most traded currency in the World.

So now let us ponder on the points as to how and why the Brexit storm was cooked up and who the key personality’s to it was.

In 2015, the Conservative general election victory ignited a manifesto pledge to hold an in-out referendum on the UK’s membership of the EU.

David Cameron (Ex-PM of Britain) had made this promise at a time when he was under pressure from the Eurosceptic lobby. Hence, Cameron promised to campaign with his “heart and soul” to keep Britain in the EU. Several members of his cabinet campaigned to leave.

Other than David Cameron the following personalities played a key role:

The point of contention now lies on why Britain wanted to exit the Union. Following are the key issues on which the leave brigade argues on.

On the Contrary, the stay campaign (Those who don’t want Brexit to happen) believe Brexit to be a prodigal attempt and stress the following points:

The following chart reflects the year on year per person GDP Rate and proof that post-unification of Countries under the E.U, growth was inimitable. 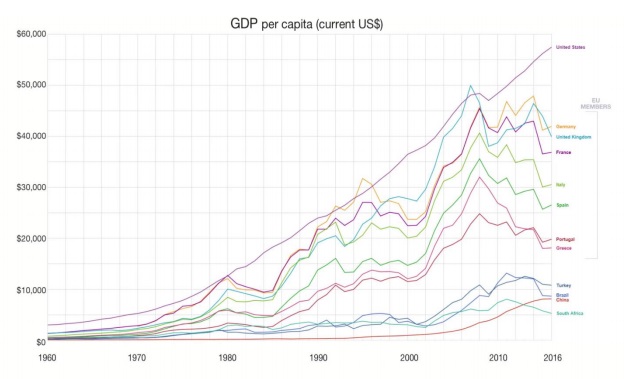 The following table represents the possibilities or the modes in which Brexit was contemplated to occur in 2016. 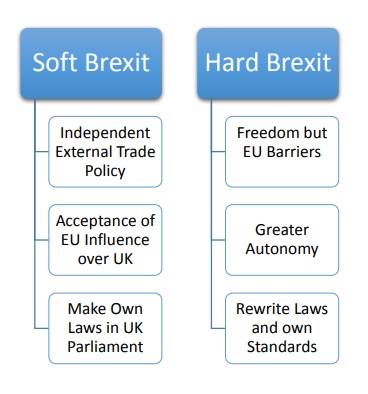 Theresa May’s term as the British Prime Minister had been primarily dominated by Brexit. May was the longest-serving home secretary in the recent history of the U.K., a High-level Cabinet minister who campaigned for the UK to stay in the EU until the referendum took place. Later she sent a letter to the president of the European Union Mr. Donald Tusk invoking Article 50 of the Lisbon Treaty starting the two-year countdown to decide on U. K’s Relation with the EU.

Boris Johnson became prime minister on 24 July 2019. The result broke the deadlock in the British Parliament and ensured that the United Kingdom would leave the European Union on 31 January 2020.

My Take on the situation:

4.The new trade deal has left the service sector including lawyers, architects, consultants, and others uncertain about its future dealings with the European Union.